After winning the Start Cup Piemonte Valle D'Aosta 2020, the start-up pre-incubated at I3P is awarded at national level for its innovative project in the medtech field. 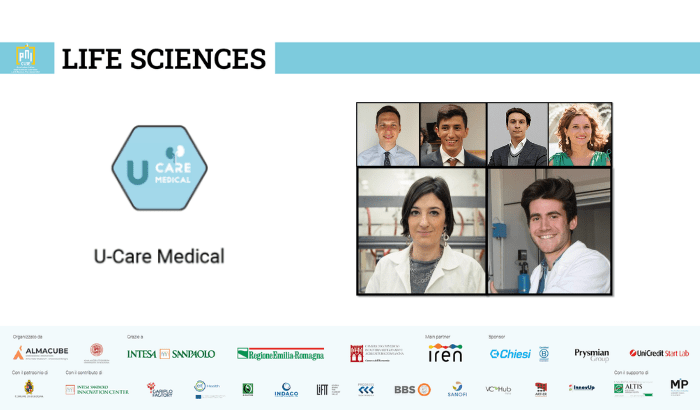 At the end of an online marathon that brought the value of innovation, digital and research to a wider audience than usual, the winners of the 18th edition of the Italian National Award for Innovation (PNI) were named in Bologna on Friday, December 4, 2020.

This year, Italy's largest and most widespread business plan competition was hosted by the University of Bologna and Almacube. The winners were selected from among the 16 super-finalists who had already won the 14 regional Start Cups, by a Jury composed of representatives from the world of business, university research and venture capital. The total prize money distributed along the entire path, from the regional competitions to the final challenge, amounts to 1.5 million euros: about 500,000 euros in cash and 1 million in services, offered by the universities, PNICube's member incubators and its vast ecosystem of support for entrepreneurial innovation.

Among the winners of PNI 2020, and of the related €25,000 cheque, is U-Care Medical, an I3P-branded start-up that arrived at the final event after winning the Start Cup Piemonte Valle D'Aosta. U-Care Medical received the Life Sciences Award, dedicated to projects aimed at improving people's health, thanks to its technology for the early diagnosis of acute renal failure, from which about 40% of patients admitted to intensive care units suffer. The start-up is developing an innovative medical device capable of predicting the onset of acute kidney failure, with which to achieve a reduction in costs for the healthcare system and a greater likelihood of saving lives.

"It is a combination of sensors and AI algorithms," says CEO Andrea Ancona, "A non-invasive hardware for monitoring a patient's diuresis, equipped with an artificial intelligence algorithm, owned by U-Care, that analyzes the trend, allowing the doctor to predict episodes of kidney failure up to 12 hours before they happen."

U-Care Medical also won the G-Factor Special Prize. Assigned by the incubator-accelerator of start-ups and life science spin-offs of Fondazione Golinelli, this award consists of a cash prize of € 3,500 and direct access to the last selection phase of the Call For Innovation 2021 - Life Science & Digital Health, which includes a series of one-to-one meetings with representatives of the scientific, industrial and venture capital world.

"This 2020 edition reminds us of the importance and role of research and how decisive its contribution can be in providing answers to the major issues of our time," said Alessandro Grandi, president of PNICube. On the sidelines of the event, the president of the Bologna Chamber of Commerce, Valerio Veronesi, commented: "Ideas, opportunities and novelties arise from confrontation. Never as in this period we need new solutions and a change of perspective."

The initiative fosters the matching between the innovation demand of top players in the German-Italian business community and the innovative solutions from start-ups.

NASA International Space Apps Challenge 2022: the space hackathon is back in Turin with I3P

The Incubator of Politecnico di Torino will host the local event of the 11th global edition, with challenges open to all space, science and technology enthusiasts.

Fondazione CRC and I3P present the new edition of the initiative with a dedicated event on September 15, 2022 in Cuneo. It will be possible to apply for the call until October 16.

Among the initiatives of the main Italian technology event will be a pitch for early stage start-ups to present their business idea to investors and business angels.

Following the success of the first round of start-up selection for the incubation program, ESA BIC Turin announces its second call, which will remain open until September 9, 2022.

CTE NEXT, the House of Emerging Technologies of Turin, celebrates one year of activity

377 companies profiled, over €800,000 in investments and new perspectives thanks to PNRR and other European funds.