ActInSpace Turin 2022: the award-winning projects at the I3P space hackathon

Five competing teams won prizes at the Turin competition thanks to their innovative ideas in the field of space economy: some of them could now evolve into real start-ups. 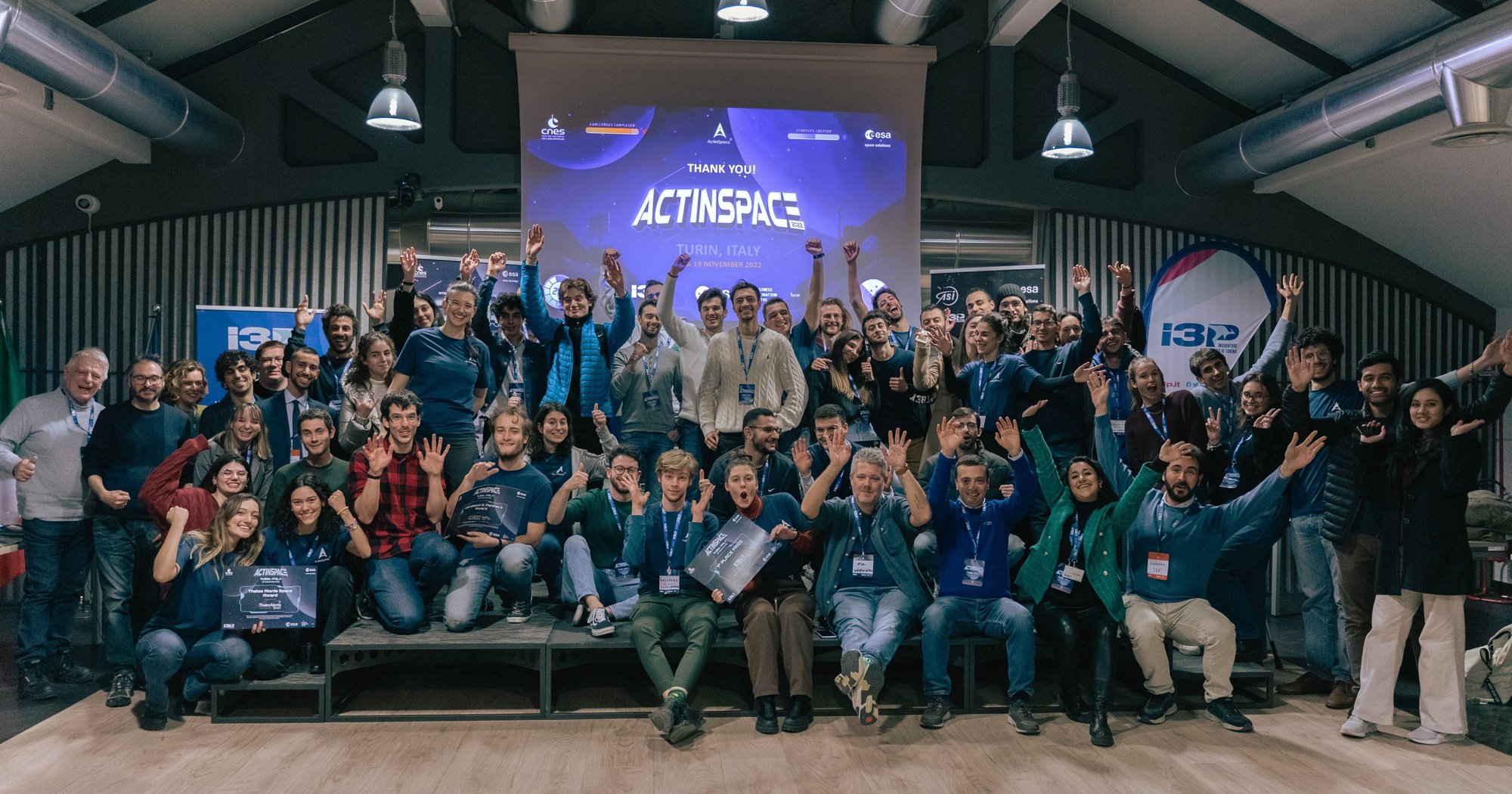 Passion for space, teamwork and a great desire to create something new: these were the ingredients for success at the 2022 edition of ActInSpace, the international hackathon for innovation in the space economy held on Friday 18 and Saturday 19 November. This year the event took place in Turin, the only Italian location, hosted by I3P as part of the ESA BIC Turin activities.

About 50 participants, including many from other regions or other countries, gathered in 11 groups in I3P's Agorà Hall to develop their technological and entrepreneurial projects in 24 hours, choosing from over 30 challenges posed by the initiative. Among the sponsors and partners who contributed to the event with prizes and expert mentors to assist participants: Thales Alenia Space, Center for Near Space (CNS), Jacobacci & Partners, Argotec, Kurs Orbital.

First overall winner of the competition was team LoveInSpace, consisting of Beatrice Cascone, Filippo Giustini, Lorenzo Moretti and Kristers Nagainis, with their interesting project "Breathe Safely in Space" developed within the framework of Airbus Challenge No. 2 "Make Me Fly". The team presented a proposal for an innovative air sanitisation filter, made up of technologies already available and durable with minimal maintenance requirements. The filter would be marketed both for applications on Earth (public transport, health facilities, viral emergencies) and in space scenarios (space stations, moon bases, Mars missions). The team won the First Place Prize, which consists of an incubation programme at I3P to try and transform their project into a real start-up, as well as a nomination for the best Italian team for the international ActInSpace 2022 finals. 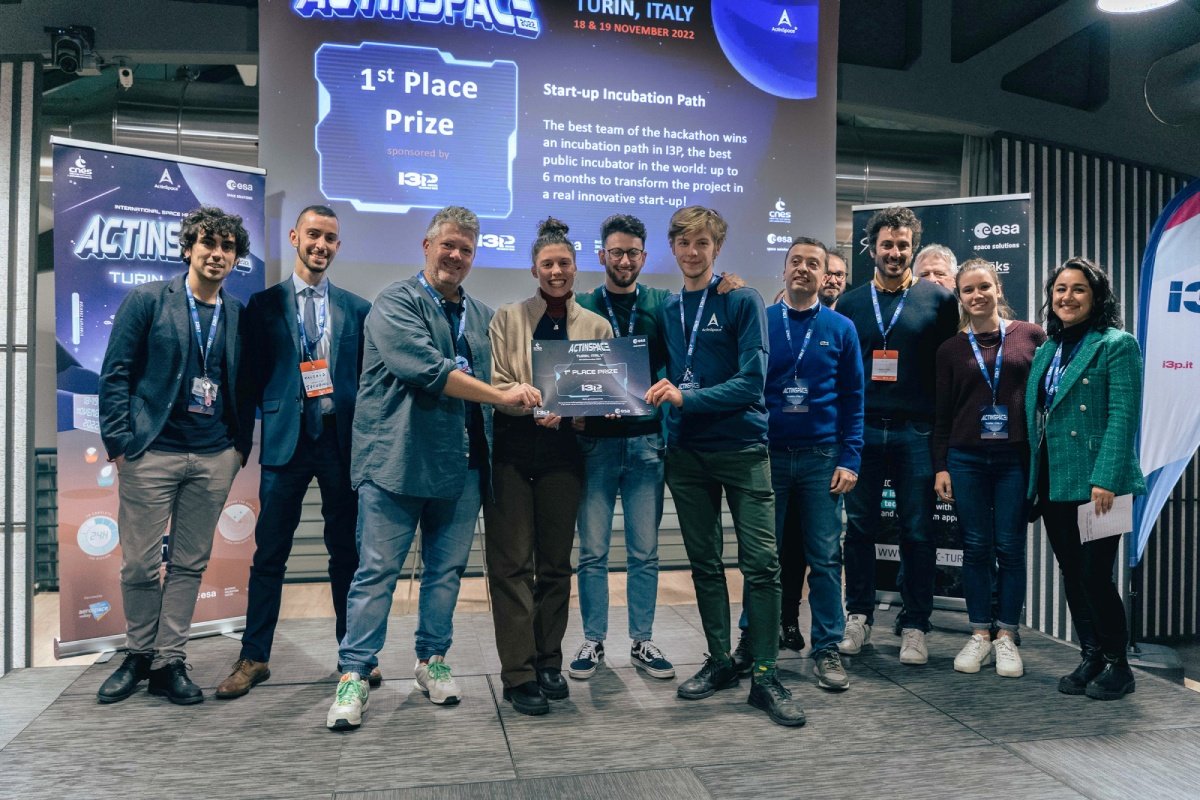 I3P then awarded a special prize - the I3P Special Award - to the Turbofun team, creator of the project "Cargo Moon Taxi" for the CNES Challenge No.3 "Buckle up! Engine self ignition". According to the team, consisting of Emanuele La Falce, Gloria Nallo, Elisa Sperandio and Pietro Tosana, Cargo Moon Taxi is a project that aims to significantly reduce the cost of transporting payloads to lunar orbit, with advantages in terms of reliability and safety of operations compared to systems already in use. Turbofun also won an incubation programme in I3P, during which the team can develop the business idea and potentially get to propose it to the main international space agencies. 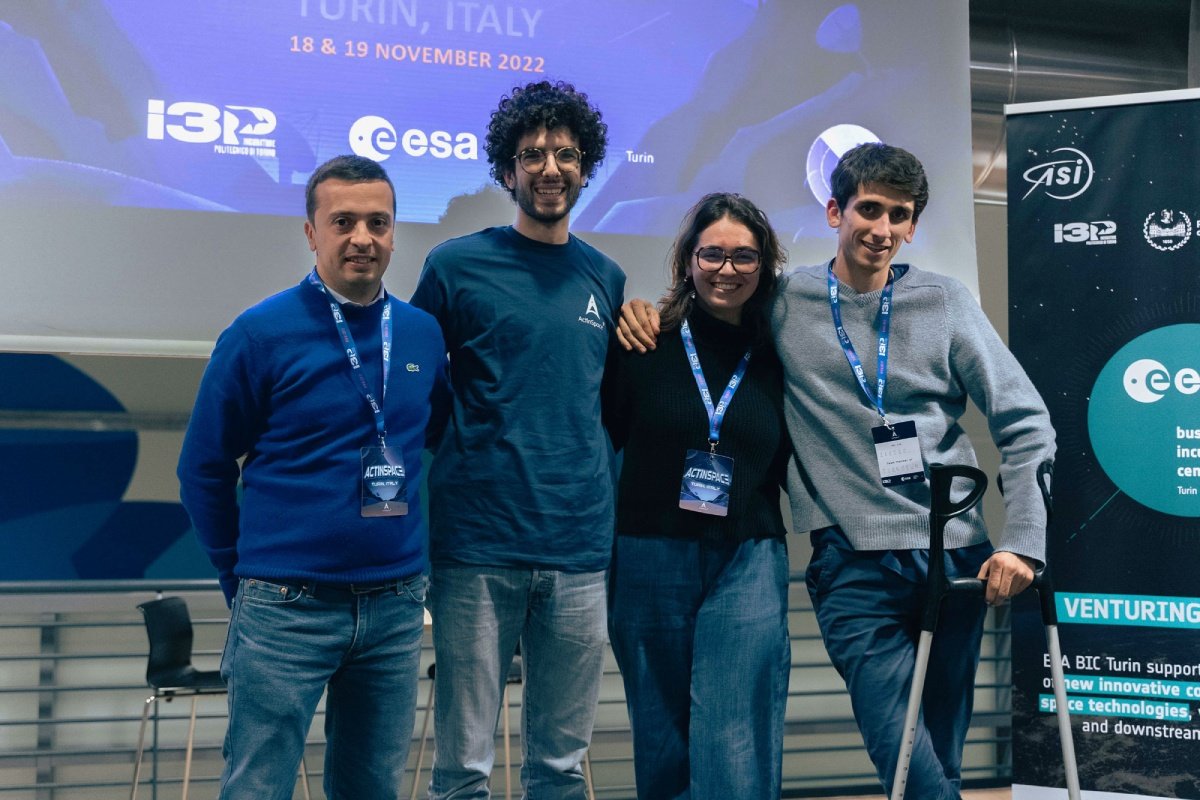 Moving on to the prizes offered by the sponsors of the Turin hackathon, the Thales Alenia Space Award went to TeamRockets, including Quintilla Berti, Monica Cortigiano, Alberto Cravero and Elena Faustini, for its project to collect and recycle disused satellites, which also helps to reduce the long-standing problem of space debris in orbit, in order to use their materials for example in the production of solar mirrors through 3D printing. The possible practical applications of this idea range from illuminating solar panels at night to using light for farming in the coldest parts of the earth. The team won the exclusive opportunity to visit the Thales Alenia Space facilities, thus coming into direct contact with a leading player in the aerospace industry.

The prize awarded by the Center for Near Space (CNS) of Naples, already a sponsor of the previous NASA International Space Apps Challenge 2022 hackathon held in Turin at I3P at the beginning of October, was awarded to the Golden Space team, composed of Carmela Marika Accettura, Edoardo Baraldi, Francesco Caporusso, Giovanni Antonio Cossu and Leonardo Pappalardo. This group came up with the idea of a modular, scalable and flexible cluster of satellites to offer satellite servicing - from refuelling to inspection and maintenance of geostationary satellites - that could one day "eliminate the need for governments and companies to invest millions, and sometimes billions, in designing, building and launching replacement satellites every time repairs or fuel are needed". Through the CNS prize, the team won a one-year membership to the Italian Institute for the Future (IIF), with access to its regular publications, megatrend analysis and futures studies. 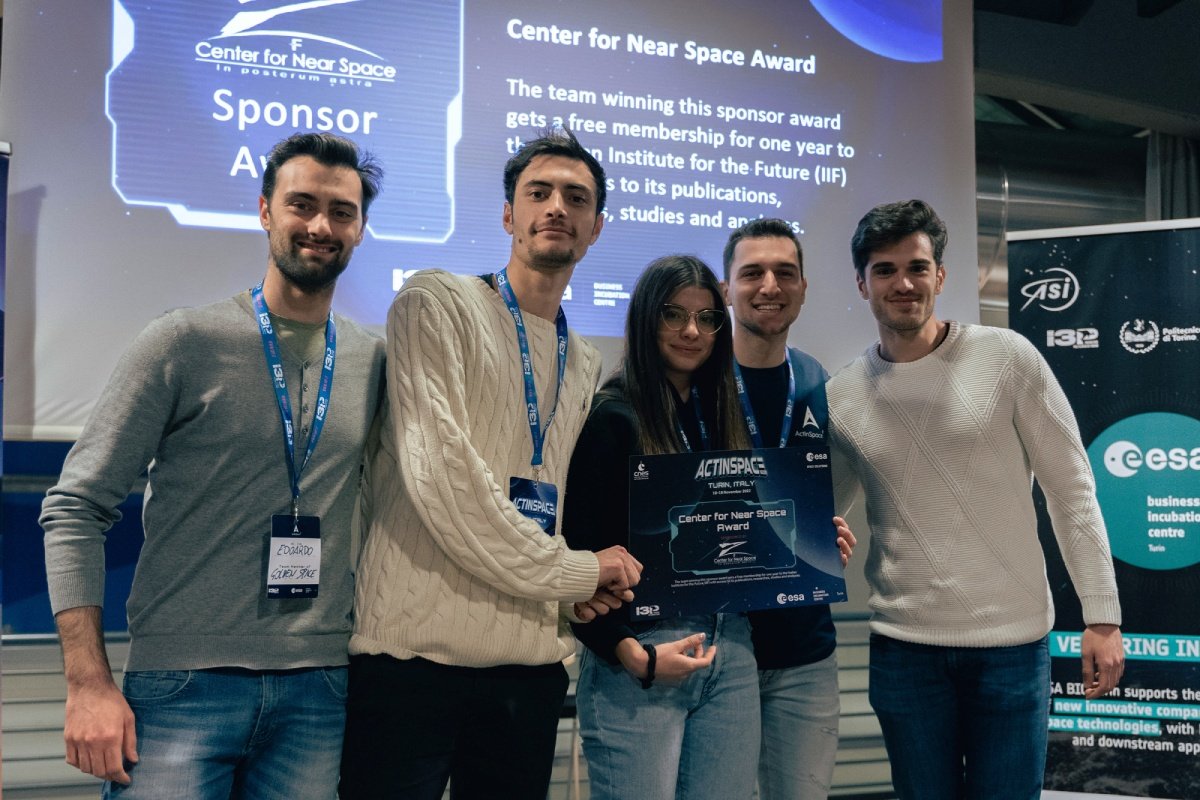 Finally, the Jacobacci & Partners Award was awarded to That's No Moon team, whose members are Massimo Alfieri, Diletta Compagnone, Christian Pascale and Federica Schena. The project focused on finding a universal technology capable of moving different types of cargo with precision and accuracy, regardless of their fragility and even without the need for human presence. The answer was a new "Helicraft Carrier" model, a hybrid carrier aircraft with rotating wings, solar-powered electric motors, advanced stability and aerodynamic performance making it suitable for terrestrial environments as well as, in the future, for other planets or their satellites. As a result of being selected for the award by the European group Jacobacci & Partners, the team will receive a strategic coaching session on industrial property, a key aspect of defending and enhancing the intellectual property of any start-up. 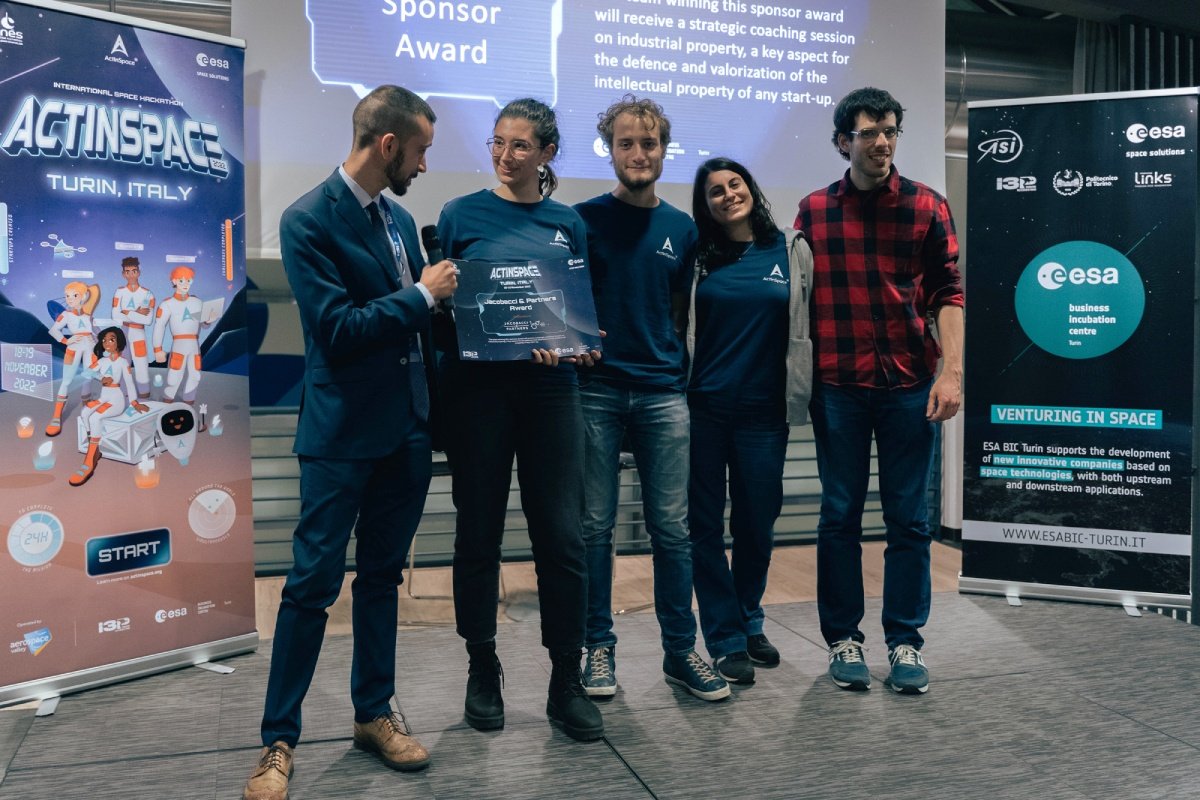 Organised on a global level by the French Space Agency (CNES) together with the European Space Agency (ESA), with the organisational support of Aerospace Valley and ESA BIC Sud France for this fifth edition, the hackathon brought together space enthusiasts from five continents - 1,700 people worldwide simultaneously took on the challenge - with over 60 participating cities from Canada to Australia.

In the coming months, the countries with more host cities hosting the initiative locally will organise regional and national finals to elect their best project team, which will then represent them at the international finals that will be held on 13 and 14 February 2023 in Cannes, France. Up for grabs for the global winners is a wide range of official and sponsor prizes, including, for example, a parabolic flight aboard an Airbus A310 Zero-G.

Addressing the launch of the hackathon, Giuseppe Scellato, President of I3P and Coordinator of ESA BIC Turin, stated: "We are honoured to be able to collaborate with CNES, ESA and Aerospace Valley on this new edition of ActInSpace, even more so since the aim of the event is to promote entrepreneurship in the space economy: a mission fully shared by ESA BIC Turin incubation programme".

NSE Expoforum Pitch Competition 2022: an opportunity for start-ups and scale-ups

The initiative offers a €30,000 total prize pool and the participation in the NSE ExpoForum 2022 in front of investors, companies and space agencies.

The aim of this initiative, the first in Italy, is to create the conditions for channeling resources to the innovative start-up ecosystem.

Are you an Italian startup interested in the Spanish market? Enter the competition by October 30, 2022 to fly to Barcelona and present your business idea!